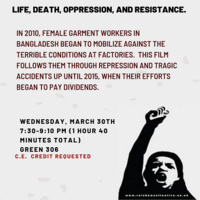 This documentary, shot over a 5 year period, features the lives of the women at the grass roots of the garment workers’ struggle in Bangladesh.  In 2010, when the workers’ attempts to organize a union in the workplace would lead to beatings, firings, and arrests.  Over the next few years, deadly factory fires spurred the mobilization, and by 2015, the long fight begins to pay dividends.