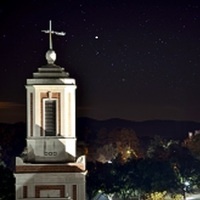 On April 26, 1920, astronomers Heber Curtis and Harlow Shapley engaged in the "Great Debate" on The Scale of the Universe at the Smithsonian Institution in Washington, DC. In this talk we will celebrate the centennial of this historic debate by examining the views of Curtis and Shapley on the two primary subjects of their debate: the nature of the so-called "spiral nebulae" and the size and shape of our Milky Way star system (and our location within that system). We will examine the data and arguments that led these men to very different conclusions. Curtis believed that our Milky Way system was relatively small and that we were located near its center, while Shapley believed in a much larger Milky Way with our solar system far from the center. Similarly, Shapley believed the spiral nebulae to be structures much smaller than the Milky Way and either inside it or just beyond its boundaries, while Curtis thought the spiral nebulae were distant star systems comparable in size to the Milky Way system. We will see how several discoveries in the years following the Great Debate not only resolved these disagreements but helped usher in an entirely new view of the universe and our place within it. It's no exaggeration to say that humans live in a very different universe now than they did 100 years ago.